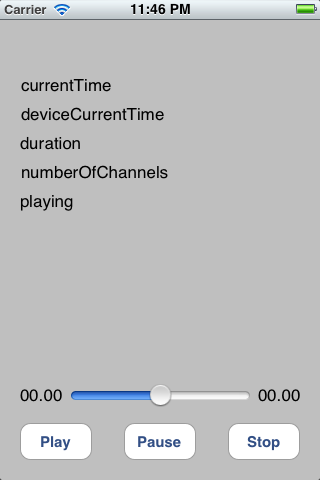 Since the UI for this tutorial is a little busy and this is not, after all, a tutorial about using Interface Builder I will provide a starting point project with the UI already constructed: IDZAudioPlayerTutorial0.zip

Creating an instance of AVAudioPlayer

To use AVAudioPlayer you need to import AVFoundation.h. Edit IDZViewController.h and add the following line:

Add a property to the class extension to hold your a reference to your player instance:

Keeping private properties and methods avoids the interface in your header file become cluttered with details a user of the class need not know.

Add a synthesize statement for this property:

In Xcode 4.5 you do not need to add a synthesize statement, but I still like to do it to explicitly give the property and instance variable distinct names.

The downloaded project contains a file Rondo_Alla_Turka_Short.aiff. Add the following code to create a player loaded with this file.

Finally update the play, pause and stop methods as shown:

If you compile and run the project you should not be able to tap the Play button and the music will start playing.

The duration and numberOfChannels will not change during playback so they can be set just after the player has been created. This is also a good time to set the minimumValue and maximumValue of the currentTimeSlider. To do this add the following code to the end of viewDidLoad:

Updating the Controls During Playback

A timer can be used to periodically update the display when the audio is playing. The timer should be started when the user taps the Play button.

Add a property to the class extension for the timer:

Also add a synthesize statement near the top of the implementation (you can skip this on Xcode 4.5):

Lines 5-8 create a timer that will call a method timerFired every 0.1 seconds.

Declare a stopTimer method in the class extension:

Add the method to the implementation:

Line 3 stops the timer from firing and line 4 signals to ARC that the timer is no longer needed.

The timer must be stopped when:

The first two cases can easily dealt with by modifying the pause and stop methods:

The latter two cases can be dealt with using delegation and the AVAudioPlayerDelegate protocol.

To begin signal to the compiler that your view controller will be implementing the AVAudioPlayerDelegate protocol, open IDZViewController.h and add the protocol to the interface definition.

Back in IDZViewController.m add the following method declarations to the class extension:

We’re now finished with the timer, time to turn our attention back the updateDisplay method.

Add a declaration to the class extension:

The implementation is straightforward:

The reason for using a separate method to update the slider labels is that when you implement seeking you will want to be able to update them separately from other display elements.

You should now be able to compile and run the project, and all the UI controls should update as the audio is playing.

A seek feature can be added by completing the implementation of two methods that were included in the skeleton project.

The currentTimeSliderValueChanged method is connected in the XIB file to the Value Changed action for the horizontal slider. Add the following lines:

This code stops the display update timer so that the user’s dragging is not being contradicted by the current position and also updates the slider labels so the user knows where they are dragging. You could also stop playback if you wanted to, but I prefer letting it continue until the user releases the slider.

When the user releases the slider, a Touch Up Inside action is generated. In the skeleton project this action is connected to the currentTimeSliderTouchUpInside: method. The following shows the completed implementation:

This stops playback, sets the player’s currentTime property to the value of the slider, and restarts playback from that position.

You can download the complete source code for the project here: IDZAudioPlayerTutorial1.zip

A professional software engineer dabbling in iOS app development.
View all posts by idz →
This entry was posted in Tutorial and tagged AVAudioPlayer, AVFoundation. Bookmark the permalink.